The Sandgate Cup has been keenly contested every single year starting in 1933. This event has been Sandgate’s premier golf competition and the course is presented at its very best in early Autumn. Once again our major sponsor was The Village Taigum and we thank them for their ongoing support. 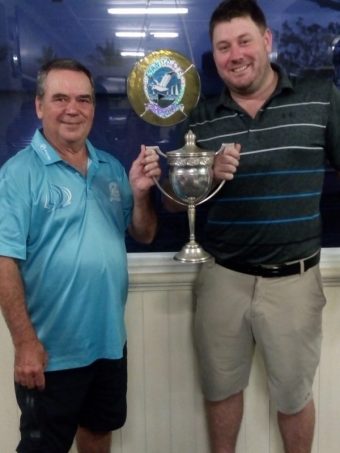 Captain, Allan Head awards The Sandgate Cup to Michael Ward who managed to finish 3 strokes clear of the field. 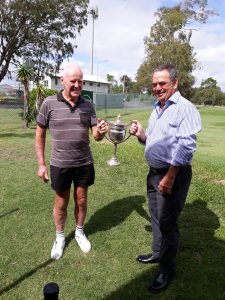 2020 winner of the Sandgate Cup, John McNay being congratulated by 2019 winner and Club Captain, Allan Head

Congratulations in 2021 to Mr Michael Ward who handled the lush conditions better than 103 other golfers on the day. Playing with an 8 handicap and in the last group of the day, Michael completed the front nine in a creditable 40 strokes. His best was yet to come though as he crafted an even par 36 for his final nine. His 76 off the stick was not only the best on the day, but quite remarkable given the lush green fairways which for once offered little run.

Michael was particularly pleased with the number of times he managed to “one putt”on the fast greens and said afterwards that the lack of wind on his last nine also helped his “high ball” flight. The next best scores on the day were from Jon Webb and Shane Rhind who both carded 71 nett.

High praise is extended to the many voluntary members who each put in countless hours preparing the course for play after the heavy rains just two weeks ago. Once again, the membership of our club has rallied together to prepare the 100 year old course in the best possible condition. 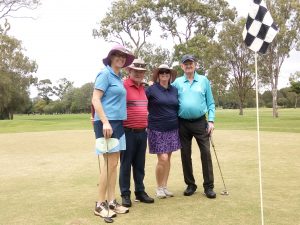 First group of the day… Claire, Barry, Sharon and Rob 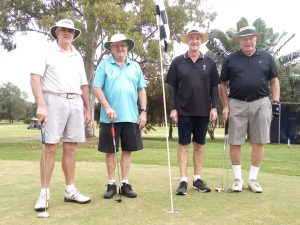 Bruce, Warwick, Terry and Ray (also a past winner) on the 9th green 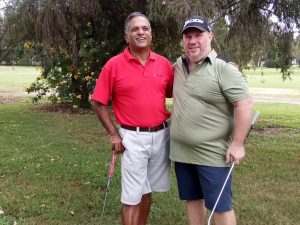 Visitors Andy Chandra and Peter Blackburn… 1995 and 2004 past winners of “The Sandgate Cup”. 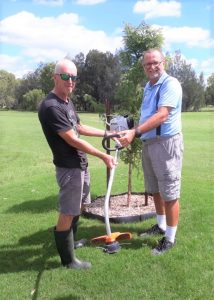 Seen here adjacent to the Centenary Tree, Maurice presented the Whipper Snipper to SGC Grounds Director, Andy Coller.
The course has been inundated with rain in early April and the tool will receive a decent workout over the coming weeks.

Any member who can give some time to mowing and general course clean up should contact Andy who will outline jobs to be undertaken and the necessary safety precautions to be heeded.

4BBB event for trophies donated by our Patron, Jared Cassidy. 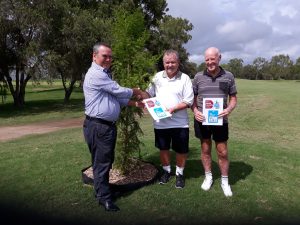 With a score of 45 stableford points, Alan Jeffery and John McNay showed the rest of the field how to handle the course after recent rain.

Sadly, for the tail of the field, the rain returned before all could finish their rounds. This was the only “damper on the day” and the Centenary Opening Day was enjoyed by 103 golfers.

On behalf of Patron, Jared Cassidy and with our Centenary Tree as backdrop, Men’s Captain Allan Head is seen here congratulating Alan and John with their trophies for this honour-board event. 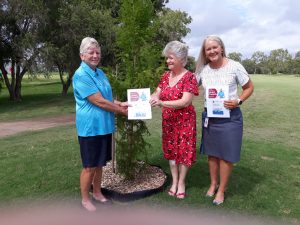 On this day, Life Members, Joy Black, Kevin Madsen and Lex Hughes planted a tree to commerorate 100 years since the beginnings of  the Sandgate Golf Course.

A native tree, Araucaria cunninghamii commonly known as Queensland Hoop Pine or Moreton Bay Pine was chosen and now proudly sits at the walkway to the first and tenth tees for all to see as they commence their golf at Sandgate. We thank Councillor Jared Cassidy,  MP Minister for Sport  Stirling Hinchliffe, and Catherine Palmer (representing Federal Member for Lilley, Anika Wells) for being present for this occasion. Jared is our current patron and also sponsored the Golf competition on this day. 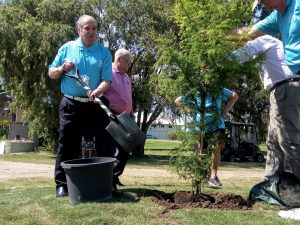 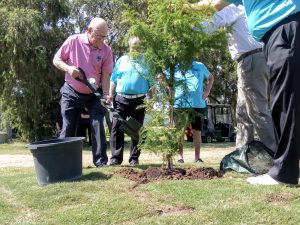 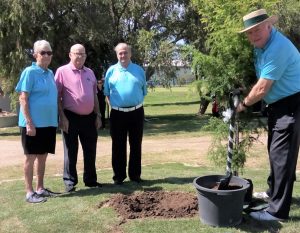 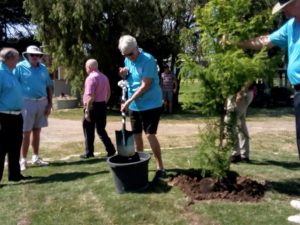